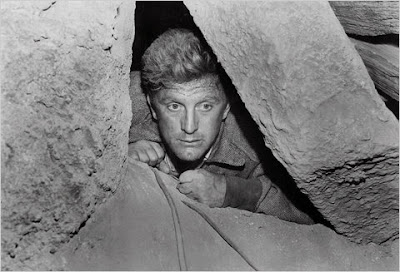 ”Kirk Douglas starred as a former big-time New York City newspaper reporter in possibly the greatest man-stuck-in-hole-while-media-watches movie of all time, Billy Wilder’s “Ace in the Hole,” which came out in 1951. On Wednesday, like many of us, he watched as Chilean miners emerged from the earth one by one. City Room gave him a call and asked if it brought back memories.

“I tell you, I kept thinking about it,” he said by telephone from Los Angeles as he watched the rescue.

Mr. Douglas, now 93, played a reporter who had been working his way down the journalism ladder — until a man became trapped underground in New Mexico. Bingo: a big story, one sure to revive his career. If he could just keep the poor guy stuck in there long enough for the news to spread. (O.K. — it wasn’t exactly like the Chilean situation.)

Mr. Douglas remembered how the director explained the plot’s inherent appeal for the masses. He said that Wilder told him people were not drawn to floods or earthquakes the way they were drawn to disasters like the one in the movie. His words go quite a way toward explaining the worldwide fascination with the Chilean situation.

“I remember he said to me, ‘Kirk, one man or a couple of men trapped underground, they always respond to that, because they imagine themselves in that situation.’ Wilder, he made me think, how would I feel if I were trapped?” Mr. Douglas said. “Would I ever get out? It’s terrifying what I would have to go through.”

Of course, he did not have to go through it, not even while filming “Ace in the Hole,” which itself was inspired by real-life events. The reporter Mr. Douglas played, Chuck Tatum, manipulated the story as the rescue turned into a circus (in fact, Paramount Pictures changed the film’s title to “The Big Carnival” before it was released). But the man trapped underground was played by Richard Benedict.
---

Ace in the Hole

---
24 Comments
1. October 13, 2010
5:27 pm
Link
As I watched the media massing at Camp Esperanza the other day, I also recalled this movie although I couldn’t think of the name. I remember watching it umpteen years ago on Saturday afternoon TV.
Clearly this rescue, and the media frenzy it has engendered, is an example of life mimicking art; rather than the other way around.
— George

2. October 13, 2010
5:59 pm
Link
I’m glad someone else caught the similarity to this excellent film. Everyone should see it, not that it would change anything.
— Robo_SFO

3. October 13, 2010
6:47 pm
Link
“Ace in the Hole”, and its depiction of a “media event” was one example of the craft of Billy Wilder and how far ahead of his time he was.
Like his 1961 “The Apartment”, which deals with office sexual politics in a manner unequaled until “Mad Men.”
— Aredee

4. October 13, 2010
7:22 pm
Link
There were a lot of good movies in the 30’s and 40’s that focused on the newspaper business.
They made life as a gritty news reporter look glamorous, exciting and adventuresome.
Do you suppose all the college degrees have now made journalism look just like every other Ivy League profession?
— Perley J. Thibodeau

5. October 13, 2010
8:02 pm
Link
Always nice to hear from the legendary Mr. Douglas. That the subject is the equally legendary Mr. Wilder and his brilliant film is icing on the cake.
— Mike C.

7. October 13, 2010
8:16 pm
Link
In the movie Kirk Douglas character orchestrated a drilling operation that that was not needed to rescue the man in the mine shaft in order to play out the story to the newspapers and ended up with a carnival complete with a ferris wheel on the site. The end result in the movie was the miner died in the shaft and the Douglas character got stabbed by his squeeze . Not much is similar to the professional rescue operation that is on going in Chile except for the miner that has his wife and squeeze waiting for him on the surface.
— JAMES FM

8. October 13, 2010
9:38 pm
Link
“Ace In The Hole” was featured on Turner Classic Movies several years ago. I too kept thinking about the movie, and the song “We’re Coming, Leo”, as the Chilean rescue mission pressed onward.
TCM seems to look to current events in planning their schedule, so I’m hoping “Ace In The Hole” gets a well-deserved return soon.
— goatini

9. October 13, 2010
10:09 pm
Link
This is the first good thing to happen in the first decade of the twenty-first century.
Can one use the word “first” three times in one sentence?
— anastasios sarikas

12. October 13, 2010
10:39 pm
Link
I feel like nobody else has mentioned Jessica McLure, who was stuck down a drainpipe, but was also riveting when I was a kid.
outrageousnb

13. October 13, 2010
10:43 pm
Link
Add me to the list of people who was spurred to recall this film in light of recent media events that, thank heavens, had a much happier ending! It was an excellent movie, and it’s so nice that Mr. Douglas is still alive nearly 60 years later to discuss it.
— Bettye Underwood

14. October 13, 2010
10:44 pm
Link
First, I am happy every miner is safe. I too thought of Ace in the Hole as this disaster unfolded. It is interesting how the number of miners has increased already from 24 to 33 and how media-savvy they all appear to be (I heard they were fighting amongst themselves to be the last one out of the mine). In a few years, every man in Chile will claim to have been one of the Camp Esperanza miners. Perhaps there should be a reality show, “The Real Miners of Chile.”
— Lynn in DC

15. October 13, 2010
11:10 pm
Link
I had just been boring my office colleagues in Australia about this very point and then I opened up the NY Times and there is a story. Made me realise I was far from the only one.
— Stokesy100

16. October 14, 2010
12:27 am
Link
Billy Wilder and Douglas are over valued products in the same way that hundreds of movies “Grengas” with contents copied from stories from other places and countries that are not just USA, by Hollywood producers looking for fresh money only, I imagine Yankee film industry should be making up stories and distorted in this Chilean Odyssey is a true story that surpasses all fiction, the Americans know much about it, with September 11. Americans do not appreciate or value anything that is not within their borders. His arrogance, lack of respect for other cultures, and deformed excessive pride, makes the whole world hates their culture, beginning with those silly movies wilder.
— Antonio Alvarado

17. October 14, 2010
12:52 am
Link
Thank God! This finally answers the question I’ve naturally been asking about the mine disaster n Chile — what does Kirk Douglas think?!
— greg depaul

18. October 14, 2010
7:38 am
Link
After watching the 33 miners being rescued, this is one film I’ll have to dig up. One has to wonder if Chilean President Sebastien Pinera has seen this film.
— warrior ant press

20. October 14, 2010
1:38 pm
Link
I too immediately thought about this film when I first saw the early reports of the Chilean rescue operation on the BBC. However, it wasn’t the nature of the miner’s entrapment so much as the media circus that was developing, that made me think of the film.
— DESIGN PARTNER

21. October 14, 2010
3:50 pm
Link
Really enjoyed hearing from Kirk . (they don’t make them like that anymore!0
Talking about the movie, “The Apartment’….rented it again recently….a big favorite of mine! Wonderful!!
— Cheryl Sullivan

23. October 14, 2010
7:18 pm
Link
Well, President Piñera did exactly the same thing that the reporter in the movie did: he transformed it into a circus. Now, Piñera wants them to play a soccer match with his ministers.
— Jorge González

24. October 14, 2010
9:37 pm
Link
I do not condescend or patronize the many Chilean reconciliations and embraces that were the easy substance of the live video of all of yesterday’s, in a way, uncontrived, successes.
–a breath of fresh air, in the otherwise Fox-ridden effluvium of dismal spectacles, and encapsulations of jabber, that goes down on TeeVee.
Interesting, and scarey, times we live in.

I’d forgot this “rendition” of
the ascension from the Cave, the late scene as the x-tian myth would have it, of His
horizons again, after three days . . .
. . . a \”coming outta the Hole\”, and whatever many, other, quick-grasp’t or -gasp’t imageries, and bone-mottos.
But for B&W, here it rises again,
like the Fenix, christen’d number [3 . . . n]? maybe.
Ah, that symbological old movie.
_________
doomed to a Repeat, itself, ourselves . . . hmmm.
. . . [the neck'st day:]
Out here, there’s thirty-three incipient raconteurs, or storytellers out there, collectively just pop’t outta El horno, (\”the oven\”—at 69 days, not precocious toast, nor half-baked)
On yesterday’s ‘stream’ seeming a Latter Day epiphinanity,
i remark, sans genuflexion,
from an online edition, late last night, a NYTimes’ lapse—into the deep–it was fell secular reportage,
when The Desk could no longer sustain a High Church Posture, on
the moment’s Miracle, on Live.
And here i quote you:

—Esteban Rojas, 44, said he would give his wife of 25 years the church wedding she always deserved, while Yonny Barrios, 50, faced a slightly more complicated future. The woman he embraced upon exiting the rescue capsule turned out to be his mistress, not his wife.

–Google Earth has made the moonescape terrain quite cinematically seizable for me, that Dry Desert all ready, of cuprous ruddy worn hills and colour–like those moonrises that have the deep rouge, you know . . .